The fire of 1914 that swept through Sedgwick. Read More >

1944– January 14th: The last big fire to burn through the Sedgwick District, burnt from Ravenswood to near Kynton. 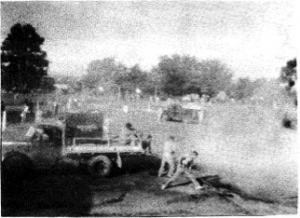 February meeting: A minute of appreciation was passed at that meeting “to recognise the fine work done by the Brennan family in the operation of the telephone service (continually for almost three days) and also in the manner in which they directed fire fighters to where they were urgently required.”

December: One 120 gallon tank with pump and hose received from Forests Commission.

1953– Clive Wilkin showed his model of a loading ramp. The ramp he designed would enable a fully filled 400 Gallon tank and motor to be loaded onto a truck. The Brigade installed one of the ramps in 1955, this facility created great interest with the C.F.A. building some of the ramps in different districts around Victoria. 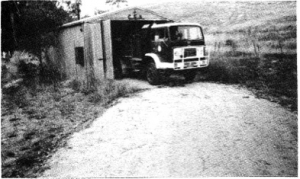 1979– Fire Reporting Service started. The four phones were connected at the homes of G. Wilkins, M. Drechsler, B. Conway and Jack Drechsler.

1983– Started to raise money for a “Brigade owned” second truck.

1987– An International truck was purchased by the Brigade and tank and motor fitted by C.F.A. This vehicle is the property of, and controlled by the Sedgwick Brigade.

The Sedgwick Fire Brigade has provided a great service to Sedgwick and surrounding areas on numerous occasions over it fifty years of existence. In recent years brigade members have fought fires in various part of Victoria. E.g. Mt Macedon, Hattah National Park, and Maryborough. 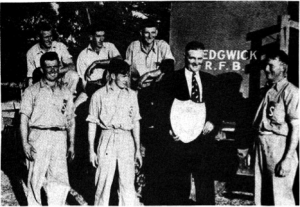 There have been some officers and members of the brigade who have served the district for long periods. E.g. Norm Steen was Secretary for the first 20 years., and took a keen interest throughout the brigade’s 50 years. The late Jack Drechsler was Captain for 29 years. until 1973, and was then succeeded by his son Vin, who was Captain for 19 years. Other officers who have served for long periods are Paul Brennan 24 years., Glen Wilkin 20 years., Bernie Conway 31 years. and the late Bill Drechsler 25 years.