1947 After applying for land to be used for recreation, that land where the hall and tennis courts now stand was granted and was published in the Government Gazette on the 17th. December. The area granted was one acre, three roods, thirty perches.

1949 A collection for donations to help finance improvements at the Recreation Reserve with £121 being collected. A Government grant was received that year for clearing, grubbing trees, fencing and also to provide toilets at the Recreational Reserve.

Over the years other improvements have been made, such s playground equipment erected, more clearing and maintenance. 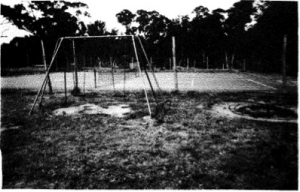 Since the inauguration of the Trustee’s and now the Committee of Management some present and past members have served the district for a long period of time, such as Paul Brennan 43 years., Norm Steen 39 years., the late Bill Drechsler 41 years., and the late Jack Drechsler who served for 35years. as Secretary.

The building of the Sedgwick Hall by the district residents was a major undertaking.            At some stage from the initial meeting in 1945 until the hall and improvements were paid for nearly all the community helped in some way.

The money for the hall was raised by holding dances at the Sedgwick School, and with dances and Balls held at Spring Gully or Strathfieldsaye Halls. 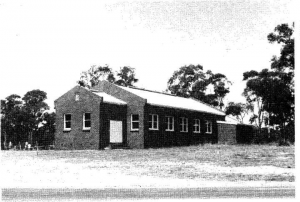 After the hall was built fortnightly Saturday night dances were held for quite a few years. The Annual Sedgwick Hall Ball was very popular.

From the initial meeting in 1945 till his death in 1979 Allan Drechsler was the secretary of the hall committee, and his great enthusiasm and hard work was major factor in the hall being successfully built and paid for. After his death Wendy, his daughter in law, carried on as secretary until the Hall Committee disbanded in 1991. The running of the hall was then left in the hands of the Sedgwick Recreation Reserve Committee of Management.

Chronology of the Sedgwick Hall

1945 On 20th. Oct. Cr. C. Wirth presided over a public meeting at the Sedgwick School convened to raise funds for a hall in the Sedgwick District.

“That night a motion was moved that the secretary write to the Shire council asking that a portion of road near tennis courts be made available as reserve”.

Dances in the school and a Ball at Spring Gully were held and £168 was raised for the year. Dances and a Ball were held each year. 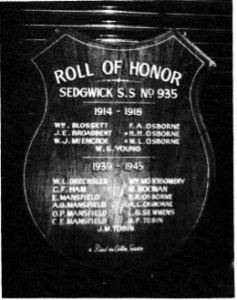 1950 From this time on the only elected committee was President, Vice President, Secretary, Treasurer, and all meetings were public. Preliminary steps were taken to find cost of a hall. Over the next five years a great deal of discussion was held on types and sizes of halls.

1956 Special meeting called and it was decided to build a hall 60 x 30ft. Also to apply for a Government grant through the council. Investigating a site for hall.

1957 More discussion on the types of halls. £1500 grant made available to help build hall. 26th December- plans drawn up for a brick hall.

1964 18th August- Tenders accepted for kitchen and toilet block, to be erected by Leigh Williamson.