The first cricket that we can trace was played about 1918 in Brennan’s paddock (opposite house) near the Springs Road. The wicket was a track made hard by its use from the horses and drays.

After a short time there, cricket was then played on the south end of Costa’s paddock. (The remains of the concrete wicket is still there today.) The cricket team was made up with players from Sedgwick and Mandurang South areas, and great interest was shown at that time. 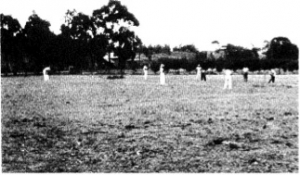 About 1920 some of the players started a team called the Sedgwick Comrades with Josiah Semmens as captain. This team played on a pitch in- Steen’s paddock (on the north side of the hall.) So for a time Sedgwick had two cricket teams. After Mandurang South started its own team, the two local teams eventually combined and played on the pitch in Steens. Matches were played on most Saturdays in the cricket season against neighbouring district teams and teams form Bendigo.

In the mid 50’s the Emu Valley Cricket Association was formed and Sedgwick joined that Assoc. Sedgwick played in the E.V.C.A. until 1970 when the club disbanded. Latter a dam was built on the pitch in Steens paddock to supply water to a new house built by Peter Steen. 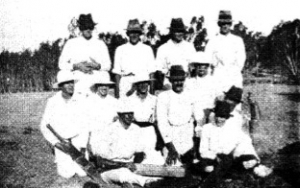 The club reformed for the 1977-78 season and again joined the E.V.C.A. using Mandurang oval as a home ground. Since 1977-78 the club has played in five grand finals, four in A Grade and one in B Grade, unfortunately losing them all.

Sedgwick was the first sponsored side in the E.V.C.A.

Over the years there have been many talented cricketers play with Sedgwick, but one who had a great record as a player then as an administrator and umpire, was Bill Drechsler. His outstanding record was recognised when he was made a life member of the Emu Valley Cricket Association.