From the records available the Sedgwick Tennis Club was formed at a meeting on the 2nd. Dec. 1910. A motion by Mr A Steen sec. Mr T.A. Young that a club be formed. Miss A Young was the first secretary. Yearly subscriptions were one shilling per member.

The first Club tennis was played on a dirt court at the Sedgwick Primary School. Social tennis and matches against neighbouring district teams were played.

There was a period of recess in the 1930’s. The club reformed again after a meeting on Aug 2nd. 1938. A motion was passed that courts be built on the present site. After permission was granted the area was cleared and levelled.

The Sedgwick members did some of the initial clearing of the trees, some being very large, by hand.  More work was carried out by some of the council workers on the “Susso” programme of the time. The courts were then fenced

and nets purchased. Tennis was played on the new dirt courts by May 1939. In 1940 a pavilion was built on the road side of the courts.

In 1942 a motion was passed asking members to bring half a cup of tea and some sugar for the afternoon tea. (It was because of food rationing due to the war) The club was very active during this time having around 30 members. Social tennis and matches against other neighbouring district teams were played.  During this period the courts were resurfaced with coalas and creek sand.

About 1950 money was raised for the tennis club by holding rabbit drives on a Sunday. Over 100 pair would be  caught in an afternoon.

There was another period of recess from about 1964 until it reformed in 1971. Social tennis was played until  1973 when it joined the Redesdale Tennis Association, and has played in it to the present time. 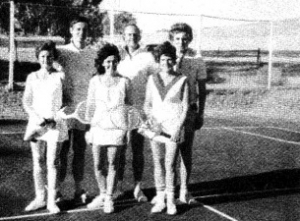 The club has had up to three teams participating in one season but at present has only one A Grade team and one Junior team. Over the years the club has won premierships in A, B special, B and C Grades and also in the Juniors.